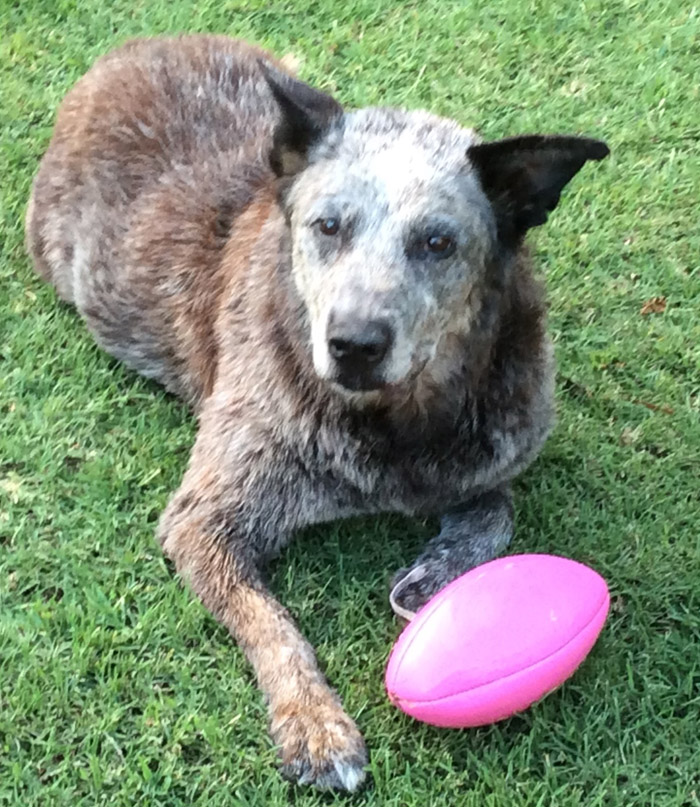 Kenny the Cattle Dog 4th July 2001 – 16th April 2016 Kenny ( Blue Dog ) was adopted by us from the Sunshine Coast Animal Refuge when he was four years old. We chose him because of his cheeky, posed smile that he had in the photograph on their website. We drove up from Ipswich to collect him and, on the way home, we called into a pet shop to buy him a bed and dog mat and all the other stuff that dogs need. When we tried him on his cushioned dog mat, he wouldn’t get off so we had to drag him around the store until we got to the checkout. We gave him his first hydro bath that day – which he hated. He was a terrific dog to have in the family – very loyal and very protective of Trish and our / his property. He loved his walks around the streets and parks of Ipswich, his swims at Moogerah Dam and Fingal Beach and loved chasing his football. Every afternoon between 5.00 and 6.00 pm was family time in the backyard with Kenny – having a beer and throwing or kicking his ball with him. About 12 months ago, Kenny developed Cushing Syndrome and that slowed him up a bit and, more recently, his back legs went on him as did his eye sight and hearing. We did the humane thing and had Kenny euthanised at the Booval Vet Hospital on Saturday 16th April followed by a cremation at Pet R.I.P in Ipswich. It was a very difficult decision for us to make as Kenny loved us dearly and will be sadly missed by us. Nothing can change the experiences that we shared with Kenny. The past is secure and cannot be changed by time or circumstance. We are so grateful that we were able to be a part of Kenny’s journey through life. Not the least hard thing to bear when they go from us, these quiet friends, is that they carry away with them so many years of our own lives – John Galsworthy Rest in Peace our Kenny.