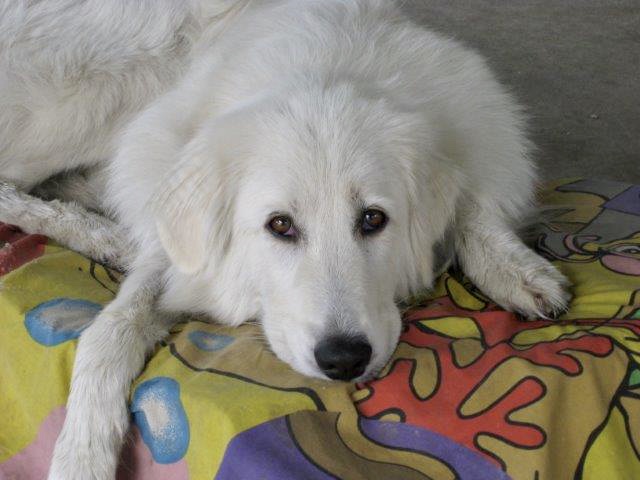 Where does 14 years go? 14 and a bit years ago I made an enquiry on petlink about a Maremma puppy. I wanted a girl. Because I thought Bentley my Smithfield cattle dog would accept a female as a companion and I chose a Maremma because I thought she’d love him.

This girl was the only girl in a litter of ALL boys and she was in Townsville. I still contacted the breeder and I told her all about why I wanted her. She told me a man was coming to meet her that day so she might be sold. I said that’s ok, if he wants her then she should let him have her. The next day I was at work and I got a phone call from the breeder saying she couldn’t sell her to him that she just had this overwhelming feeling that I was supposed to have her. She said if I could transfer the money she could have her on a plane flight that afternoon. Of course I didn’t have the money on me, so between Dad, Helen and myself we came up with enough money to cover the cost. Helen even did the direct deposit to secure her transport. Then we had to get her from the airport ? Dad suggested Simon, Ali’s brother could pick her up but it was under the condition that he deliver her to Carmen’s place so she could have first cuddles.
Mum and I drove to Carmen’s place to await the arrival of our Maremma puppy.
Then, I get a phone call from Dad saying “There’s a bundle of white fluff waiting here for you” So mum and I jump in the car and race home.
I get out of the car and open the gate and I see this little bundle of fluff sitting at the top of the driveway with this look on her face to say “where have you been, I have been waiting for you” I call her and she comes running straight into my arms. I hear Dad saying “what have you done?”

When I took her to the vet for her needles I was whisked into the consult room and promptly lectured by our vet at the time at what a stupid idea it was to get a Maremma for a pet! He told me how much work she’d be and that anyone that was going to be around her would have to work incredibly hard to establish a bond with her while young. I took all of this on board and the fluffy white bundle grew up to be an incredibly unique girl because her personality was the polar opposite of a Maremma.

It took me weeks to find a name for her. I searched race horse names in the newspaper, searched on line for guardian names, names for white, girls names. Then one search gave me Nissa and it meant “Happy little Girl” Although I wasn’t sold on the name itself – she WAS my happy little girl and from then on known as Nissa.

Nissa adored her human pack and her children – my nephews. She would watch them play at Mum and Dad’s. Nissa especially adored her Grandad. She would follow him everywhere and he in turn adored her without a doubt.

When mum and dad had to say goodbye to Cooper they didn’t want another dog. We all made a decision that Bentley my Smithy that loved being an only dog would go to live up the road with mum and dad and Matty and I would get Nissa a friend. As you know Matty and I brought Maestro our Great Dane home. She loved him instantly. We eventually moved house and took Nissa and Maestro with us. At 2 and 1/2 years of age after 12 months of complications and searching for answers Maestro had to be put to sleep on my 30th birthday with a twisted bowel.

A few months later we introduced Nissa to Ace our little and I empathise little Great Dane X. He was smaller than our cats and she wouldn’t bid him the time of day. But, he never gave up trying and eventually he won her over.

Fast forward to earlier this year in March Nissa’s arthritis started to get the better of her and we along with the guidance of our vet implemented a plan to manage her pain. We thought we’d only have weeks but we gained an extra 6 months with her. These last few weeks she began to struggle and Matt and I would mention the chat but she seemed happy. The last 3 days and nights she has been extremely restless and just getting up and down were taking its toll on her. She was tired. I started to feel like it was her time, but I needed for her to tell me. Saturday morning she told me. A beautiful friend checked in with her and she confirmed she was ready. We offered mum and dad the invitation to be here with her and us to support her on her journey.
We phoned our vet and he was more than happy to make the house call Sunday morning.

I helped Nissa to bed Saturday night and I lay on the floor with her and talked to her about our journey together and her journey to come and that I had the power to release her from this body that was causing her so much pain. That I loved her from the minute I saw her sitting at the top of that driveway waiting for ME.

This morning came and as much as her body hurt she did the rounds of the yard and ate her breakfast. Mum and dad arrived and Nissa went straight over to meet them. I watched her from inside as she wagged her tail ever so softly while dad spoke to her. My heart broke.
I watched her follow Matt and dad around the yard joining in on eveything as hard as it was for her to just walk.

I got a blanket and lay it out on the grass and asked her to come. Matt was sitting with me. She looked at me and then turned to look at dad, she turned around and walked after him. Matt and I laughed and I jokingly said “go to the one you love most” lol Dad stopped and they had a moment. Then she came back over, gave mum a lovingly look and then sat by me on the blanket. Tim rang and said he was on his way. She lay down in front of me and I cuddled her and caressed her and showered her in love and tears. When Tim arrived I thought she’d try to get up and bark but she didn’t. When he got to us she lifted her head and they looked into each others eyes. He put his head on hers and then she lay back down. She knew what he was here for and she seemed to welcome it. As he gave her the needle surrounded by her favourite people on earth, I felt her last exhale as her soul left her body ?

She left this world the same way she came into it. Full of love and on her terms.

She had the most perfect passing. How many animals truly get that. I for one am extremely honoured to have been her guardian and companion for all of these years and I am incredibly grateful to our vet who was able to provide this perfect passing for her.

Our hearts are broken but still full. Nothing will ever be the same without her but I wouldn’t change it for the world.

Thank you for reading this far and sharing our love for Nissa. She was my soul dog and I will never forget her and the joy she brought to everyone that knew her. RIP Nissa – Our happy little girl ❤️